Like many of the traditions in the United States, weddings have a certain amount of pre-ordained events that must take place as part of the celebration. Almost everyone is familiar with the ceremony and reception, but there are other 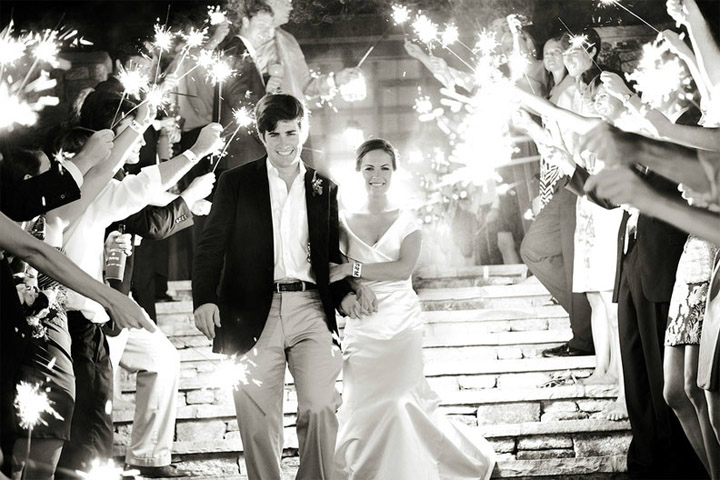 important events that need to take place before and after the actual wedding. If you are having an American wedding in traditional style, there are certain things that you’ll have to remember to setup so that everything goes off without a hitch. Here is a quick breakdown of some of the things required as part of a traditional American wedding.

As soon as a couple is engaged, they usually host an engagement party. This will include food and drinks for all of your guests, and usually some form of entertainment is necessary. Though this isn’t actually part of the wedding and takes place months in advance, is still part of having and American wedding.

Usually about a week before the big day, the best man and made of honor respectively host parties for the bride and groom. Usually there are all sorts of games involved, as well as going out to a few local bars to have a really wild night. This is supposed to represent the last night of being single for both the bride and groom, so sometimes things get a little crazy.

Sometimes called a groom’s dinner, the rehearsal dinner usually takes place the evening before the actual wedding day. Essentially, everyone involved in the wedding as well as close family show up at the wedding venue for a rehearsal. Following that rehearsal, there is traditionally a dinner party that is hosted by the groom’s parents for all of the people who attended the wedding rehearsal.

The ceremony is fairly self-explanatory; it’s the main event where the bride and groom actually tie the knot. The wedding ceremony is sometimes at a church or separate location, but often times it is held at the same venue as the wedding reception.

The wedding reception is probably the largest and most memorable portion of your wedding for all of the guests. Everyone congregates in a large hall to eat, drink, and dance as they socialize with people they rarely get to see. Usually you hand out wedding favors such as wedding sparklers, bubbles, or other trinkets to make the experience better for all of the guests. Additionally, the reception is when other classic events such as the bouquet toss and garter toss take place.

After your reception, it is customary for an American wedding for the couple to go on a honeymoon. Sometimes they leave right from the reception hall and head for the airport, but usually they leave a couple of days after so they have time to open their gifts and get everything settled after the big day. Usually a honeymoon will be the most lavish vacation a couple will take in their lives, so usually it will be to a tropical location such as Hawaii or Tahiti. Regardless of where the couple chooses to go, it is almost always incredibly romantic and one of the most unforgettable experiences of their lives.

Articles from the same category:

This website uses cookies to improve your experience while you navigate through the website. Out of these, the cookies that are categorized as necessary are stored on your browser as they are essential for the working of basic functionalities of the website. We also use third-party cookies that help us analyze and understand how you use this website. These cookies will be stored in your browser only with your consent. You also have the option to opt-out of these cookies. But opting out of some of these cookies may affect your browsing experience.
Necessary Always Enabled
Necessary cookies are absolutely essential for the website to function properly. This category only includes cookies that ensures basic functionalities and security features of the website. These cookies do not store any personal information.
Non-necessary
Any cookies that may not be particularly necessary for the website to function and is used specifically to collect user personal data via analytics, ads, other embedded contents are termed as non-necessary cookies. It is mandatory to procure user consent prior to running these cookies on your website.
SAVE & ACCEPT